I am trying  something new today which I hope all of you will enjoy. When I was a child , my older sister (who is an amazing storyteller), used to tell my brother and me really funny stories every night. Some of these stories are known around Turkey (especially the character in this particular story) but she always put her own spin on it.

I am not a great narrator like her but I wanted to share some funny stories with you that I learned from her when I was a kid. I hope these short stories will put a smile on your face 🙂 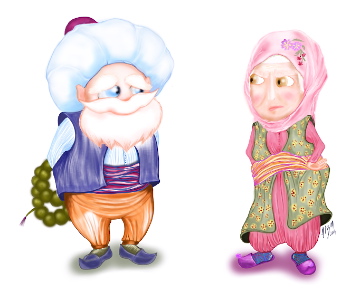 Once upon a time  there was a man who  lived in Anatolia. Everybody called to him Nasreddin Hodja who is a wise-man and people came to him for advice in his village.

One day ,a neighbour came to him with a complaint about his neighbour and asked him;

After The Hodja listened to him carefully , Hodja said;

The neighbour was delighted by the response and left feeling happy thinking he was in the right.

A short while later the other neighbour came to the Hodja and made the same complaint and he asked;

The hodja listened to the same matter carefully, then he said ;

-Yes , dear neighbour, you are right.

Hodja’s wife, having overheard the conversation between The hodja and neighbours, said to the Hodja after the second neighbour left ;

-You have listened to both of the men and told them both that they were right, Hodja, both fellow can’t be right.

-Yes dear wife, you are right too!

Retold in English by S. Köseoğlu-Ocak

Give a comment, pointer or anything else! Cancel reply